Gemma Wright from Sodexo Defence & Government Services, shares her journey to becoming a Stop Hunger charity champion and how much of rewarding experience it has been. Find out about the great work Gemma and others do for the Stop Hunger Foundation and how you can get involved.

“I first became a charity champion back in 2013, I used to work on the Nuffield contract within the Healthcare segment and was approached by my Regional Manager to see if I would support the North region in achieving their Stop Hunger goals. I hadn’t heard much about Stop Hunger at this point but was keen to take part. My first challenge was to engage the teams across the north of the UK and see who could raise the most in cake sales and raffles.

“Towards the end of 2013, I became the charity champion for the whole of Healthcare and I really wanted to get everyone involved more with Stop Hunger activities. So, with Chris’ great idea of a virtual running group, together we came up with “@sodexorunning”.

“Over the last four years @sodexorunning has gone from strength to strength, raising over £25k for Stop Hunger. We’ve also had backing from Matt Dawson, Dame Kelly Holmes and Radio Two’s Vasos Alexander! We have coordinated sponsored 10k’s mud run’s and half marathons raising funds and awareness of Stop Hunger, and we are currently in talks about sponsoring another 10k in 2019 to raise even more money and awareness.

“I have now moved across to the Defence & Government Services segment, working on the new Ministry of Justice contract. My aim for this year is to engage with Sodexo’s new employees and promote all of the great work we can do for Stop Hunger and other charities that we come into contact with. I want to encourage as many of them as possible to join the Sodexo Employee Lottery known as “Your Lucky Number” and complete their volunteering days with Stop Hunger charity partners Fareshare and Trussell Trust – I will be promoting the Stop Hunger volunteering platform, Neighbourly, for them to find out where they can sign up! All Sodexo employees get up to three days volunteering time, so what a perfect opportunity to get others involved.

“I also have scouted a potential trial site for Incredible Edible, a beneficiary of Stop Hunger that is devoted to bringing people together to transform disused areas in their communities into abundant sources of food. If successful, I’d like to roll this out across the contract – it would also be a great way to involve client sites and for us to get our staff further involved with Stop Hunger and local communities too.

“Being a Stop Hunger charity champion for me has helped to grow the commitment from the teams around me and bring colleagues together on volunteering days. The sense of achievement has been immense. I have watched people who said at the beginning, “I haven’t got time” or “I don’t want to” become really involved with Sodexo’s’ foundation and to go on to become charity champions in their own right. It’s about creating a sense of belonging and building a connection to Stop Hunger, and wanting to help people who in 2018 shouldn’t be living in poverty. It’s also motivated me to do things I never thought I could do, like cycling 220 miles in two days, running half marathons and signing up for mud runs in the middle of winter! What’s stopping you from getting involved!?”

Click here to get involved with Stop Hunger or contact StopHunger.UKandIE@sodexo.com for more information. Join us in the fight against hunger! 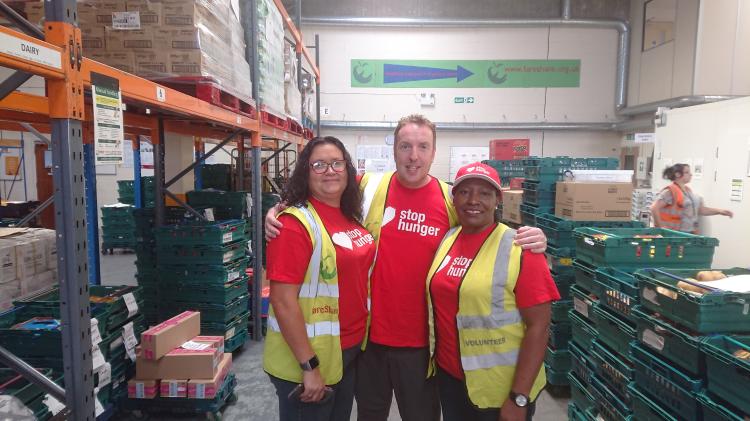