Last night (19 March), the Sodexo Foundation Dinner celebrated Stop Hunger by fund raising £174,000 and recognising those who inspire others - #StopHungerAwards

On the evening of 19 March, approximately 500 people gathered to celebrate the Stop Hunger Foundation at the 2019 Sodexo Foundation Dinner.

All eyes were on London, as guests including Sodexo employees, clients and suppliers reflected on our achievements for Stop Hunger Foundation over the past year. The dinner recognised the Foundation’s success, the impact it has had across the region and also helped to fundraise for the coming year. The event itself raised a whopping £174,000 for Stop Hunger - an amazing contribution for a fantastic cause!

2018 was one of the Stop Hunger’s most successful years, with over £350,000 donated in grants to support over 15 charity partners. These charity partners include FareShare, the Trussell Trust (the Foundation’s national foodbank partner), SSAFA, Focus Ireland, Magic Breakfast and Coram.

One particular milestone that was celebrated at the Foundation Dinner is Sodexo and Fareshare’s 10-year partnership. Since the partnership began, Stop Hunger has donated over £1million to FareShare!

The event was hosted by Sodexo ambassador Matt Dawson and included a welcome performance from the Marylebone Choir Project. The choir is an initiative which benefits directly from Stop Hunger’s support of FareShare - it was the choristers’ first ever performance!

Throughout the evening, guests were inspired by speakers who shared insight into how the money raised for Stop Hunger is spent and how it impacts local communities across the UK and Ireland.

Sodexo CEO Denis Machuel, attended the event and encouraged all those in the room to make a #MyStopHungerPledge to volunteer. Additional speeches were given by Gareth John (the Foundation’s Chair of Trustees) and Sean Haley (Regional Chair Sodexo UK & Ireland and Stop Hunger Trustee).

On the event, Sean commented “The Foundation Dinner is an important event in the Sodexo calendar where we have the opportunity to recognise our colleagues who go over and above to help our charitable efforts and to shine a light on the issues that exist within our communities around food poverty. By raising awareness as well as money we aim to help alleviate the issue for as many people as we can.”

The Sodexo Foundation Dinner was also an opportunity to recognise those who have gone above and beyond to support the Foundation over the past year. The Stop Hunger Awards had everyone on their feet throughout the night as four inspirational Sodexo employees each took home a very special trophy. Please show your support for them on social media, not forgetting the hashtag #StopHungerAwards!

Click here to read more about the winners and see more pictures from the night.

Last year, Sodexo employees volunteered for over 2,000 hours with Stop Hunger charity partners and other charity organisations. The Volunteering award was given in memory of Anita Wilson - a Foundation Trustee and Sodexo employee who sadly passed away in 2018.

Pictured: The Stop Hunger Charity Champions at the Foundation Dinner

For more information on the Stop Hunger Foundation, please see the resources here or alternatively us the contact form here. 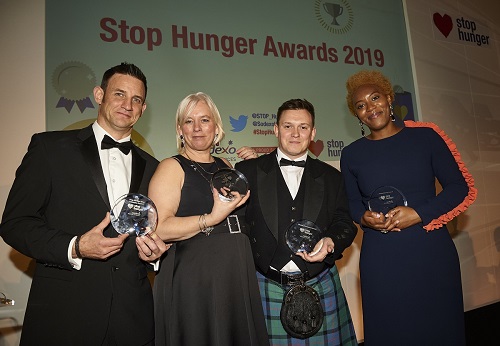