Zoe Lang completes her cycle from Lands End to John O'Groats! Zoe works as an energy and sustainability lead for Sodexo Service Operations and has cycled 900 miles to raise money for Stop Hunger.

Zoe Lang works as an energy and sustainability lead for Sodexo Service Operations. And she’s just proved she’s got plenty of both, having cycled 900 miles from Land’s End to John O’Groats to raise money for Stop Hunger.

Zoe and her oldest friend Jo Graham set off at the end of August for the two-week challenge, which took them through some of the country’s toughest landscapes. They successfully negotiated peaks of up to 6,000ft, suffering broken spokes and a few flat tires along the way.

“We developed some impressive leg muscles while climbing the Cornish hills and Dartmoor,” admits Zoe. “Then we pedalled on to the Midlands where we witnessed the aftermath of a terrible car accident, which really stressed the danger of the British roads and made those safety messages even more real.”

As the duo moved north towards John O’Groats they were met with some torrential rain, and tackled the infamous midges in the Scottish Highlands. But there was a superb surprise waiting for them at the finish line. “Members of our families had driven up from Yorkshire to meet us,” says Zoe. “We were stunned and it was great to have them there to join in the celebrations.”

Zoe has raised over £200 for Stop Hunger to date and is still grateful for any sponsorship to boost her total. All donations welcome, just click on the link to her fundraising page. 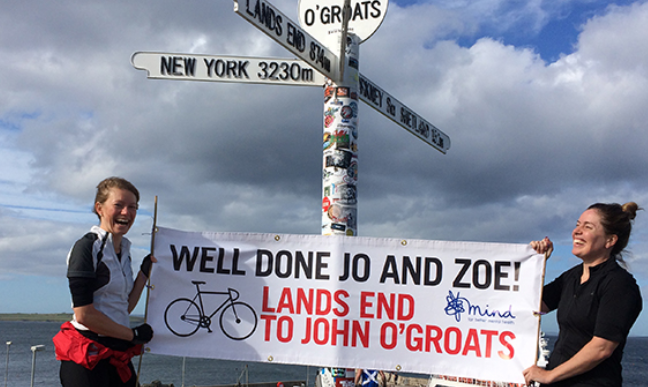