Gareth John says there were several reasons he and a friend decided to tackle a 300-mile bike ride from London to Paris in July, including to “get fit and have fun with some new people.” But, as the new chair of the Stop Hunger Foundation, his overwhelming urge was to raise money for this great cause.

Gareth is responsible for Sodexo’s legal affairs for regions in Europe and has been a trustee of the Foundation since joining the business over seven years ago. He’s now delighted to act as chair and his passion for the charity’s work shines through. “The Foundation makes a real impact and all the money goes to support carefully selected charities, such as FareShare and Coram, and other causes linked to hunger in local communities,” says Gareth.

Alongside friend Boris Prigmore, Gareth signed up for the London to Paris ride and the pair got themselves into training a few months before the event, to ensure they would both be fit for the challenge.

“The ride covered four days – and a lot of hills – but it was a wonderful experience to be out there in the French countryside with 120 other riders. I’d recommend it to anyone,” admits Gareth. “We met some inspirational people all riding for brilliant causes.”

“Boris had built-in speakers on his bike so he became a bit of a hit en route, keeping people’s energy levels up. Our arrival in Paris was timed to coincide with the end stage of the Tour de France so that gave us a little extra inspiration too,” he adds.

The boys posed for selfies under the Eiffel Tower after successfully crossing the finish line. They raised over £2,000 for Stop Hunger and you can boost the total on the fundraising page. 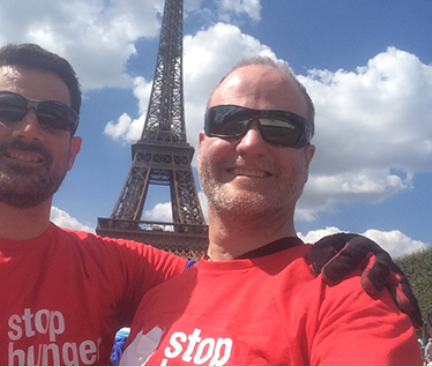